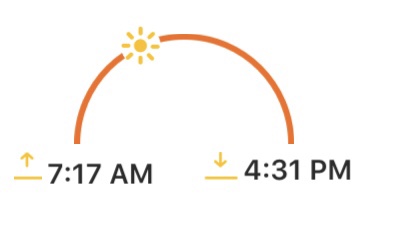 From sunrise to sunset, today is the shortest day of the year. We’re having torrential rains today so the day will seem even shorter. Despite the gloominess, it always brings to my mind a question my father would ask each year of my uncle. My father was and remains a man of very dry humor. He rarely laughed when a small smile or slight chuckle would suffice, but that was not to say he didn’t find many things funny. His blue eyes twinkled with mirth, even as he suppressed all other outward signs.

My Uncle Bob, on the other hand, found almost everything funny. He grinned and smiled and laughed out loud. He was wonderfully bald like a medieval monk and had a thick mustache beneath his wide nose, which curled up at the ends when he smiled. Now my Uncle Bob was not really my uncle; him and his wife were just very dear friends of my parents and I grew up calling them aunt and uncle. Their children were like cousins to me, at least until I realized I was terribly attracted to one of the daughters (a story for another time perhaps). Their house in my hometown was the neighborhood clubhouse. Everyone was welcome there.

My father and Uncle Bob were work partners in construction. Each day for decades, Bob would drive to my house and they would alternately drive into Manhattan, where they would work all day together on various construction sites. They spent more conscious time with each other than they ever did with their wives. They did this for decades. For their last several years, I joined them. They listened to the oldies station day after day. They discussed the Mets or the football Giants, depending on the season.

Bob was a fully functional alcoholic. I suspect he’d take a few heavy pulls of vodka before leaving his house each morning. My father and I ignored the smell of it, as he got into the car. One day he had a case of the delirium tremens as he was parking the car and hit the gas pedal when he was trying for the brake and vice versa. He had to go to rehab once or twice in those years. He’d come out 30 days later as cheerful as ever and start drinking again soon after. My Aunt Peggy, his wife, had an uncanny ability to find out whatever bar he spent his after work hours in. All in the days before cell phones and laptop computers. I was there once when the bartender -in a city saloon we just happened to choose- picked up the phone, listened briefly, and asked out loud, Is there a Bobby **** here? Bob took his turn listening, hung up, and said like a chastened child, I have to go home now.

Every year, on the day after the Winter solstice, my father and I (me in the back seat of the car) would wait patiently for Bob to arrive and settle himself in the front passenger seat. We’d drive a bit and my father would inevitably turn towards Bob and ask him in all seriousness, Is it me or are the days getting longer? Bob would just smile, having heard it dozens of times before, and its vernal equinox equivalent (Is it me or are the days getting shorter?)

I started this blog to chronicle my entry into the online dating world. Some of you might find it interesting to witness my adventures. As it goes on, I find myself adding some fiction, reviews, and general commentary. I hope you follow and enjoy. Age: 55 Gender: Male Race: White Profession: Construction supervisor Smokes: No Drinks: Socially Drugs: No Religion: a wandering Catholic © James Strummer/Last First Kiss blog,2018. Unauthorized use and/or duplication of this material without express and written permission from this site’s author and/or owner is strictly prohibited. Excerpts and links may be used, provided that full and clear credit is given to James Strummer/Last First Kiss Blog with appropriate and specific direction to the original content. View all posts by JamesStrummer