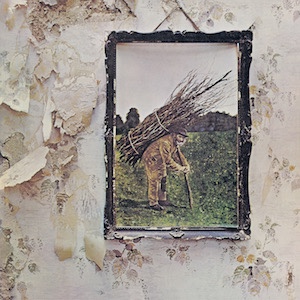 One simply cannot overstate the omnipresence of Led Zeppelin’s fourth album during the 1970’s. Punk was biting at the edges, but the mighty Zep still held sway in my workaday town. I doubt a day ever passed during that decade I didn’t hear a track from it, usually Stairway to Heaven. Even today, I only have to hear a song from either side and I find myself drifting back.

Forty years have raced past me since that Saturday night (First Kiss pt. 1 here) in 1979. The boys in their jeans and graphic t-shirts, touting their favorite band’s last concert. The girls, also in jeans, but with nicer tops on, wore their make-up inexpertly applied, a little too much rouge on the cheeks and eyes overwhelmed with shadow. Led Zeppelin IV blared through tinny speakers. Some kids smoked cigarettes, careless of their ashes. The living room, kitchen and dining room were crowded with a mass of teenagers, gathered in small huddles. I heard laughter over there, some tense words passed in the hallway. The bathroom was overwhelmed. So was the host. This was the way of these parties.

And my little gang talked, laughed and drank our beer in a corner, furtively stealing glaces at the girls in their own little scrum not eight feet away. My boys and I weren’t what you’d call popular. We populated the middle ground between the superstars and the actively disliked. We were on sports teams, but the teams neither won nor lost because of our efforts. Two of my friends were avid weight lifters and I had a barbed tongue, so we were rarely bothered too much. I rarely saw my friends get in fist fights, but they were relentless when the call came. As for me, I had been amongst the shortest guys in my class and skinniest, until my sophomore year. Then I started growing at an alarming rate. If my mother cared at all about keeping me fashionably clothed, I would have needed longer jeans every month or two. Because of family finances, my jeans were inevitably short. My mother undoubtedly figured the growing would stop at some point and new clothes could wait until then. In the meantime, I was left to my older brother’s castoffs. Most days I heard someone call over, When’s the flood, bozo? At the same time, I put on very little weight. My body geared all nutritional fuel towards vertical growth. I resembled a long, moist pry bar.

As I started to gain a little alcohol glow, I noticed one of the girls wasn’t being so furtive. Her glances lingered a bit. I stole a look to each side and even behind, despite being against the wall. I always felt a little invisible in high school. Sometimes I’d get a good chuckle with a low remark the teacher didn’t quite hear. I was built for anonymity, understood my lane, and kept in it. If ever there was a female counterpart to me, Kim Z. was that girl. When I was in school, some of the most popular girls were not necessarily the prettiest. And some of the prettiest girls somehow passed their days quietly and unnoticed. Kim was neither. She was like me, correctly classified right there in the middle lane, not passing on the left and not dragging along on the right. She was a little on the short side, brownish, straight hair with bangs across her forehead. A sprinkle of freckles splashed across her nose, palest of blue eyes. Her body was more tom-boyishly lithesome than feminine. Her last name declared her Polish roots. She had sly smile. She made her plain friends giggle with whispered asides. I saw her move by herself towards the kitchen to refill her cup with beer. In what can only be described as uncharacteristically daring of me, I followed.

I started this blog to chronicle my entry into the online dating world. Some of you might find it interesting to witness my adventures. As it goes on, I find myself adding some fiction, reviews, and general commentary. I hope you follow and enjoy. Age: 55 Gender: Male Race: White Profession: Construction supervisor Smokes: No Drinks: Socially Drugs: No Religion: a wandering Catholic © James Strummer/Last First Kiss blog,2018. Unauthorized use and/or duplication of this material without express and written permission from this site’s author and/or owner is strictly prohibited. Excerpts and links may be used, provided that full and clear credit is given to James Strummer/Last First Kiss Blog with appropriate and specific direction to the original content. View all posts by JamesStrummer

One thought on “The First, First Kiss pt. 2”